FISTF is celebrating its 25 anniversary this year, and for those who don’t know the history so much, it’s a great achievement.
FISTF was created by unifying the ETF and the FISA in 1992, through the efforts of Laurent GARNIER as the first Président, Willy HOFMANN,  one of the greatest players of all times, and Steve DETTRE of Australia.
I was priviledged to play my part through the Movement International magazine, and of course, many of the leading players around the world were receiptive to the idea of a unified organization.

Over years, and as the Subbuteo company reduced its involvement and stopped selling in some countries, it became harder for us to get new sports players. Perhaps the FISTF tour became too important, at a minimum it drained so much energy from most of us that there was no spare time left to carry on doing the “field work” of demos, promotions in school and clubs and so on.

For the past few year, we’ve seen MANY former players coming back into the game, in MANY countries. This comes along with the second or even the third generation of players starting to play and loving it: the darker dayss are going, and with this 25th anniversary, it’s time to learn lessons from the past and give a new elan to FISTF.

Towards that end, a new logo has been designed by Skander FARZA, showing the willingness to keep all of our values as well as suggesting the modernity we need to show and express!

We hope you’ll like it and take it on very quickly! From now on, it will replace the “old” one (look next page). 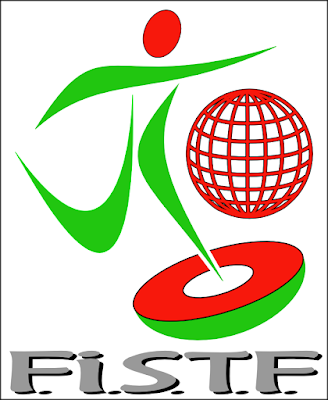